In its ongoing effort to develop a sustainable and reliable local water supply, the Santa Margarita Water District is proposing the construction of its first drinking water treatment plant. The Ranch Water Filtration Plant would treat groundwater from the San Juan Basin to supply some 1. 6 billion gallons of drinking water per year to customers.

The new plant would provide a local source of drinking water. Right now, the District imports all of its drinking water from hundreds of miles away; from northern California and the Colorado River. This water is at risk of drought, natural disasters, and regulatory constraints.

The Santa Margarita Board of Directors set a goal to diversify its water supply by 2030 by accomplishing three objectives: create a local drinking water supply; re-cycle 100 percent of its wastewater; and establish a six-month supply of drinking water stored in the service area for an emergency.

Thirty percent of the District’s drinking water demand covers indoor, essential water needs in the event of an emergency.

The District currently serves roughly 7.8 billion gallons of drinking water per year, all of which is imported. It recycles about 2.2 billion gallons per year for irrigation, construction, and other uses. In late 2020, SMWD completed Orange County’s largest recycled water reservoir, Trampas Canyon Dam and Reservoir, which will ultimately store over 1.6 billion gallons of recycled water. This facility moves the district closer to its goal of recycling and re-using all of its wastewater.

The Ranch Water Filtration Plant will be located near the intersection of Ortega Highway and Antonio Parkway and near the Chiquita Water Reclamation Plant. The new treatment plant is estimated to cost roughly $10 million to build and is planned to begin its first phase of operation in 15 to 18 months.

An existing pipeline will carry the water from existing groundwater wells to the plant. At first, the plant will supply about 2.9 million gallons of drinking water per year from treated groundwater. Treatment will include microfiltration, reverse osmosis, UV disinfection, and chloramination to meet all drinking water standards.

Ultimately, SMWD plans to recharge the San Juan groundwater basin with recycled water to bring the amount of water available for treatment up to 1.6 billion gallons per year; about 20 percent of the district’s drinking water supply.

Santa Margarita Water is constantly on the lookout for innovative solutions to reduce its dependence on imported water. 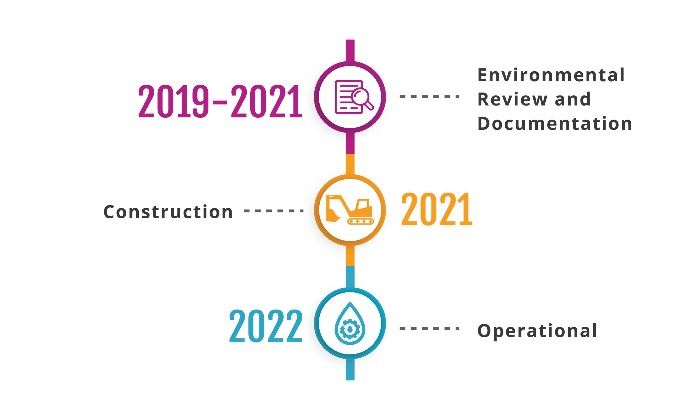 Environmental Review Documents
Pay Bill
Pay your SMWD utility bill online.
Doing Business
Find out how you can do business with the District.
Start/Stop Service
Requests to start and stop utility service.
Rebates
Find out about rebate and related water wise resources.
Board Meetings
Board, Committee, and other District meetings and agendas.
Report Odor
Report odors to the District.